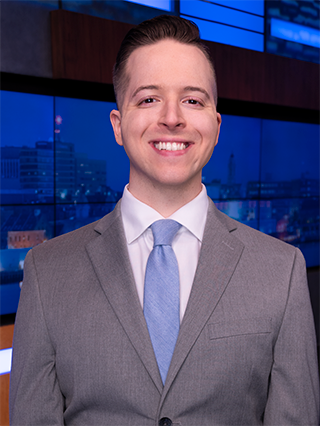 Dustin Bonk started 2019 by moving to Maine. He joined the WGME and WPFO weather team as weekend meteorologist.

Dustin has spent his entire life around the Great Lakes. He is from suburban Chicago, and in 2011, Dustin earned his bachelor’s degree in meteorology from nearby Valparaiso University in northwest Indiana. During his time at Valpo, he decided to pursue a career in broadcast.

In 2011, Dustin began his career at WLUC in Marquette, Michigan as weekend meteorologist and weekday reporter. The Upper Peninsula’s extreme winters had Dustin covering dozens of winter storms and blizzards. Some of his more memorable experiences there include reporting on the Duck Lake Wildfire, interviewing Bill Nye the Science Guy, and observing the northern lights over Lake Superior.

In 2013, he moved downstate to WILX and WSYM in Lansing. In five years in Michigan’s Mitten, Dustin covered events such as the Portland, MI Tornado, the 2013 Ice Storm, and the August 2018 Tornadoes.

After seven years in the Great Lakes State, Dustin has moved to Portland to continue his career and he is excited to see what the Northeast has to offer. When he is not working, Dustin enjoys walking, weather photography, going to the movies, and trying new restaurants and breweries.